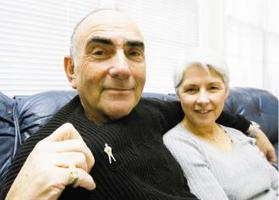 Along with his wife, Linda, Ed Levitt founded the Georgia Chapter of the Lung Cancer Alliance (LCA) in 2003 after he was diagnosed with stage IV lung cancer.  To date, their chapter of LCA has donated $130,000 to the Emory Winship Cancer Institute to support lung cancer research.

Ed and Linda also serve on the board of directors of the Georgia Institute of Lung Cancer Research(GILCR), an organization dedicated to early detection of the disease.  Their work was applauded by Senator Saxby Chambliss, who wrote and passed S.R.620 supporting “Lung Cancer Awareness Month.”  The couple also secured a proclamation from Governor Sonny Perdue declaring November as Lung Cancer Awareness Month in Georgia.

After Ed’s diagnosis with the disease, he was determined to do something about the stigma associated with it, its lack of understanding, and its under funding.  So, he founded LCA – Georgia.  With a background in international business and marketing, and specializing in motivational business speaking,  Ed was the perfect person to organize, strategize, and speak on behalf of  this cause.

Within almost three years of operation, the Georgia chapter has become the “poster child” for all state chapters of the Lung Cancer Alliance.  Ed is featured in a new book called Voices of Lung Cancer, and has had numerous interviews with CNN and other media outlets.

His mission is simple:  Stop Georgians from dying every two hours from Lung cancer.  No more excuses!   No more under funding!  No more Lung Cancer!