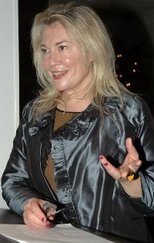 Sister of the late Dana Reeve, Deborah Morosini, MD, earned a BA from Mount Holyoke College and an MSW from the NYU School of Social Work.  Pre-medical studies at Columbia University were followed by her 1990 matriculation at Boston University School of Medicine.

Deborah has two teenage sons who she raised as a single parent  while completing medical school part-time.  Her late brother-in-law, Christopher Reeve, was the commencement speaker at her 1997 medical school graduation.  She completed a residency in pathology at Boston Medical Center, where she was chief resident.

Currently, Deborah is the Principal Pathologist for AstraZeneca in the research and development area of oncology discovery medicine.

Deborah continues to find inspiration and guidance from Dana and Christopher Reeve, and follows their entreaty to "Go Forward."