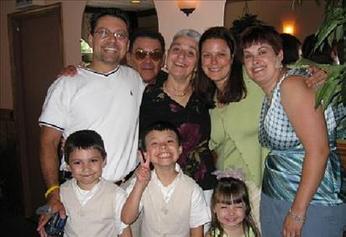 In early October 2004 Beverly was complaining to her family doctor about having trouble breathing. He knew she smoked, so he encouraged her to quit and prescribed an inhaler. A couple weeks later she went back again, complaining of the same symptoms and again, he told her it was probably just congestion and refilled her prescription for the inhaler.

On October 27th looking out the front window of her kitchen she took a dose of the inhaler and all of a sudden her throat closed up and she couldn't breathe. She quickly made it to the phone and called 9-1-1. A response team was there in 8 minutes. When she got to the emergency room they performed a chest x-ray. It was so cloudy they really couldn't see anything, so they gave her a CAT scan of her chest. A little while later 2 doctors came in and told her that they thought it was cancer, but that they would have to biopsy it to be certain. She was scared, but she wasn't surprised. She had smoked for over 47 years of her life.

Because of the location of the cancer (near her aorta) they put a scope down her throat and performed a biopsy. The results were not only lung cancer, but small-cell carcinoma. The worst kind. It was inoperable. She was referred to an oncologist, Dr. Bryansmith told her that he would get rid of the cancer through chemotherapy, and he did. By March 2005 she had rid the cancer in her lung, liver, & rib.

In June 2005 her family threw her a surprise 60th Birthday party. She never looked and felt better.

In late July she went back to her same family doctor for a check up and complained about feeling dizzy and losing her balance. This time he took no chances and sent her to get a CAT scan of her brain. The results were a small pea-sized tumor located next to the central nervous system. Due to the location it was not only inoperable but they were unable to perform a biopsy. Dr. Walter Curran  of the Kimmel Cancer Center at Thomas Jefferson University Hospital, took her on as a patient and recommended radiation and suggested that she might qualify for a clinical trial.

In conjunction with the radiation, she was given a medication called Decadron to reduce the swelling in her brain caused by the tumor. Because of her age, and that that there were less than 3 tumors, she qualified for a clinical trial that used a procedure called stereotactic radiosurgery. Stereotactic radiation therapy is simply where they use what's called a gamma knife. There is no cutting involved. Instead it concentrates several hundred calibrated low dosage beams of radiation into one spot and doesn't affect surrounding tissue. The side effects of this treatment are minimal. You don't suffer hair loss, feel sick, or have any reddening of the skin, which are fairly common reactions in external beam radiotherapy to the brain.

On September 9, 2005 she underwent the procedure. Everything looked good. It seemed to be shrinking and we were under the impression that everything would be fine. But it wasn't. She was suffering from many of the side effects from the decadron medication. She wound up back in the hospital in late September because she felt nausea and couldn't eat. As it turned out, her potassium had dropped so low that she almost died. After a few days in the hospital she was much better and back to her old self.

In late October, we started to notice that she was having trouble lifting her own body weight. She would bend down to get something but then would have to use surrounding objects to help pull herself up. She was afraid to go to the bathroom by herself after getting stuck on the commode for more than an hour one day because she couldn't lift herself up. This was no quality of life. When I called the doctor in early November to complain about this, he told me to start weaning her off of the decadron. We couldn't take her off too soon because that had other side effects. The week before Thanksgiving, she wound up back in the hospital. The decadron had taken its toll.

She remained in the hospital through December 21st, at which point the insurance company wanted her released. They sent her to a nursing home. She was there for 6 days. It was the pits. If you cannot afford private health care, then I suggest you spend as much time with a loved one at a nursing home, because all of the stories you hear are true. I did a ton of research on the web to find the best one in the area that did not have a ton of complaints listed among it. I found a facility that had one complaint in the year, so we went there. The day staff was friendly. The night shift was not so friendly. It was a building built in the 70's and it looked like it hadn't been remodeled since it was built. It wasn't the cleanest either. It is based in Willow Grove, Pennsylvania.

Since the doctors at the nursing home were unfamiliar with her case, when she started throwing up her daily set of pills they moved her back to the hospital. She remained in the hospital for the remainder of her days.

I should have mentioned earlier that on October 15, 2005, I got engaged. We planned for a quick February wedding so that my mom would be there. That was the most important thing to me. By December, it didn't look like she was going to see New Year's, let alone February. On January 1st, we married in the chapel of the hospital and they wheeled my mom down in a wheel chair to the chapel so that she could witness everything. My brother performed the ceremony (I had him ordained on line). It was so beautiful! She lived long enough to see me get married and afterwards I thanked her for making my dream come true. She said, "Anything for you kid."

On January 6th, she went to go live with God.