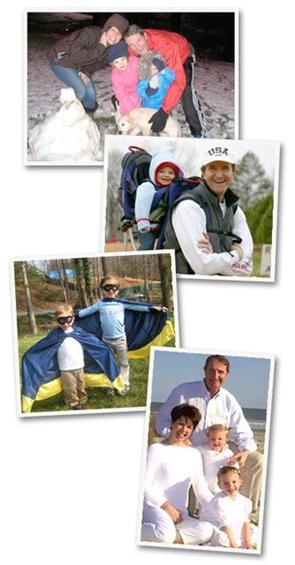 A diagnosis of Stage IV non-smokers lung cancer was only the beginning for Jeff Wigbels.

Jeff Wigbels had always been athletic. As a triathlete and marathon runner, he was in excellent shape. But on October 11, 2006, doctors discovered a tumor the size of a baseball in the lower left lobe of his lung. Further tests revealed the tumor had metastasized in his chest, abdomen and brain. He knew that the odds were stacked heavily against his survival.

The following day, Jeff’s wife, Tiffany — unaware of his diagnosis — delivered their second child, Jack. And on October 13, Jeff told Tiffany there was a good chance his children would grow up without a father.

The initial treatment recommended to Jeff was “standard of care,” a regimen of heavy radiation and chemotherapy, but Jeff wanted a second opinion.

On the advice of Dave Fulcher, who built cancer centers across the United States for 35 years, he journeyed to The University of Texas M. D. Anderson Cancer Center in Houston to meet with James D. Cox, M.D. and Roy S. Herbst, M.D., Ph.D., co-principal investigator behind BATTLE(Biomarker-based Approaches of Targeted Therapy for Lung Cancer Elimination), an innovative set of clinical trials designed to improve the choice of therapy for cancer patients by matching existing drugs to the molecular aspects of a tumor.

Jeff started treatment in December 2006. By August of 2008, the only cancer in his body was a tumor in his lung, which had shrunk to half of its original size.

Today, Jeff is watching his children grow up thanks to the world-class team at M. D. Anderson and this new type of therapy. This is not your typical standard of care. This is individualized therapy. And it’s the future of cancer treatment.

Learn more about Jeff and his fund here.